GutCutter is a software tool that aids in Post-processing. Its main function is to help prepare HTML versions of texts, but it also has an error-highlighting function. It is part of the Windows-only GutWrench suite, but can be used in combination with other tools as well.

GutCutter takes as input a "well-marked-up version" of a text, which is a text that has been readied for PPing at DP, with the addition of some HTML tags and a few other special markups. GutCutter can prepare both the HTML version and the plain-text version from this single file.

as well as the standard HTML markups:

When the plain-text version is produced, some markups are deleted, and some are converted to standard HTML markups; the result is a standard DP-style marked-up text. For example, HTML header markups are temporarily converted to bold markups (<b> ... </b>), in which the enclosed text may be later converted to ALL CAPS by GutHammer, the text-rewrapping tool of the GutWrench suite.

In addition, depending on the style used, some of the above may be modified by the user, such as:

GutCutter includes a number of different templates for producing HTML documents in various styles. Templates have been prepared to yield the prescribed styles for the following periodicals and uberprojects:

Special how-to files are included for each of the above periodicals in GutCutter's documentation. For a demonstration of GutCutter's capabilities, run it on FMdemo.txt (included in the download package) using "The Full Monty" style.

First, prepare your "well-marked-up" version by adding some more special markups to your downloaded text.

(Unless you are doing something special, leave the Add Header and Add Trailer checkboxes as checked.) 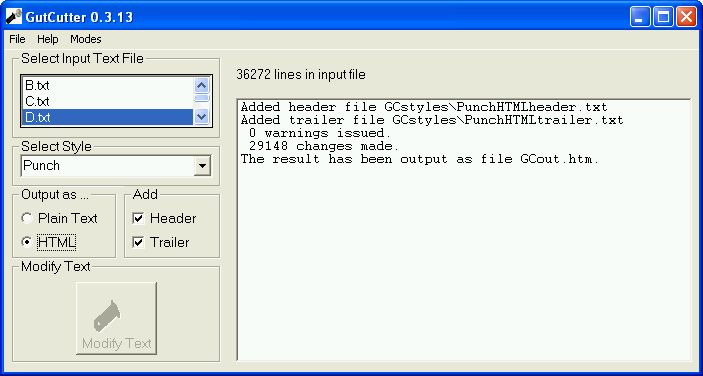 GutCutter interface, after converting D.txt into an HTML document in the Punch style

In general, this modifies the text and adds special header and trailer text, depending on the selected Style. Open the output file, GCout.htm, in your favorite browser. If you spot any errors, it's usually easier to change them in the original text, and then rerun GutCutter. (Errors are more apparent in the HTML version; that's why it's best to prepare that first.) However, be aware that GutCutter is not able to perform every step in preparing an HTML version; ordinarily, some direct editing of the HTML is needed, but put this off until you have made the plain-text version, since you might spot more errors when you inspect that.

Once the HTML version looks okay, go on to prepare the plain-text version:

Open the output file, GCout.txt (note different suffix), in your favorite text editor; this should now be a standard DP-style marked-up text. If on inspection you find any errors here, it might be easier to correct them in your original well-marked-up version, then regenerate both the HTML and plain-text versions from that. If the project is a periodical, the header added by GutCutter will needed to be edited as to date, volume, issue, etc. To complete the plain-text version, run it through any of the several DP rewrapping tools, which will also properly treat any remaining DP-style markup.

Selections under the Modes menu in the menu bar modify how GutGutter operates:

Optionally, you can add some simple extra markups to standard PG-style "[Illustration: ...]" tags to automatically scale and locate images in the HTML version. Any caption text following the ":" is automatically set as a caption under the figure. For example:

Any whole number may be used for the scaling percentage. All of these added markups are returned to "[Illustration:" in the plain-text output.

GutCutter can facilitate setting up HTML tables; this has been implemented only in certain styles, including Punch, Notes & Queries, and Lippincott's. You will have to type in only a few more characters, which GutCutter will convert to generally much more lengthy HTML markup. These characters and other HTML markups are removed by GutCutter in making the plain-text version.

Use the standard DP-style /$ ... $/ tags around each table. The opening /$ may be followed by the table summary.

Optionally, put the table caption in <caption> ... </caption> tags, on its own line after the /$.

Set each table row as a single line of text. Separate the table columns with vertical-line ("pipe") characters "|". Also, put "|" before the first column and after the last.

Optionally, indicate the alignment of each table element by adding a special character immediately after the preceding "|":

The symbols <, >, and = can also be used immediately after the opening /$ markup to indicate the horizontal alignment of the entire table; e.g., "/$=summary" for a centered table.

Some Style templates are set up to use CSS classes to align table elements in the HTML.

Note that in preparing the plain-text version, the entire <table ...> and <caption ...> tags are removed, including any optional parameters. The <table...> and </table> tags are replaced with /$ ... $/ markups (to be removed later by GutHammer or other PP tool). So the above example will appear in GutCutter's plain-text output as:

The /$ ... $/ markup will be removed (and handled properly) by any of the text rewrapping tools, GutHammer, RewrapIndent, and guiguts.

Help for Tables of Contents

GutCutter can facilitate adding a Table of Contents to a text that did not have one. In preparing the "well-marked-up version", use HTML header tags around at least every heading that you would like to appear in the Table of Contents. Then when "Modify Text" is clicked, any lines of text that are contained in the header tags are written to a file named GCtoc.txt. Insert the contents of this file into the output file you have just created. Some manual editing will generally be required (in particular, page numbers must be added, and you might have to delete some lines), but this can save a lot of hunting through the text and typing. The file GCtoc.txt will have different contents depending on whether GutCutter has just generated a plain-text or HTML version.

As a demonstration, a special style has been set up to incorporate all of the above markups plus a few additional gimmicks. While its safe use cannot be guaranteed for every project, some GutCutter users apply it routinely to all of their projects, with no complaints so far. The additional markups include:

To see a demonstration of these features, run GutCutter on the file FMDemo.txt to produce an HTML version using the Full Monty style.

GutCutter operates on only a single line of text at a time. Thus, Illustration captions and Footnotes that run on for several lines will be only incompletely handled. If it is convenient, try to edit these beforehand to fit on a single line, in which case GutCutter will be able to render the complete HTML markup. 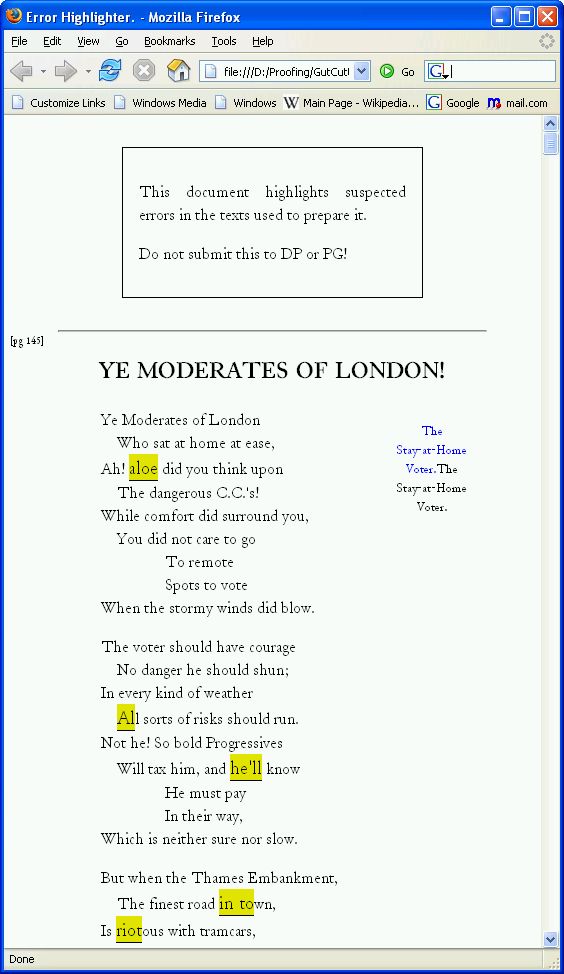 One of GutCutter's Styles is set up to prepare an HTML document that highlights many types of suspected errors in a text file, including:

To use this function:

The errors highlighted are those that would be found by GutAxe, another of the GutWrench suite of tools. The advantage of GutCutter is that the highlighted HTML document can be visually scanned very quickly for actual errors. Thus GutCutter is an optional replacement for GutAxe, the use of which has become somewhat tedious with the great increase in text quality since the changeover to four rounds of proofreading and formatting. Like GutAxe, this use of GutCutter is useful in Post-Processing Verification.

Note: The HTML file generated by this error-highlighting function is to be used for error-checking only. Do not submit it to DP for Post-Processing Verification or upload it to Project Gutenberg.