These are the usual forms of the Greek letters. Just like the Roman alphabet, Greek letters may go either above or below the line.

The last column shows the letters inline with alpha. The position of a letter is just as important as its shape. In English, you would never confuse "l" (ell) with "j" (jay), no matter how flyspecky or damaged they are, because one goes up and the other one goes down. And you can tell apart capital/lower-case pairs like Oo and Ss by their size. It is the same with Greek.

If you find a letter that doesn't look like any of the above, see below under variant forms and ligatures.

is used only non-finally (beginning or middle of a word). The form ς

is used only at the end of a word. If you come across the latter form at the beginning or in the middle of a word, refer to the double letters section below.

The two letters γ (gamma) and υ (upsilon) may be transliterated different ways, depending on the context.

The letter γ (gamma) is usually transliterated as g, but n is used instead when it occurs before certain letters:

The letter υ (upsilon) can be transliterated as either u or y. Generally, if upsilon follows another vowel, use "u". Otherwise, use "y". (For those who can recognise diphthongs: use "u" in diphthongs, "y" elsewhere.) This isn't required, though; you can use u everywhere if you want, but check with the Project Manager to make sure it's done consistently throughout the project.

Notice how many of the capital letters look just like the equivalent Roman letter:

You can almost always tell from the context if it's supposed to be Greek.

Diacritical marks (diacritics) are anything attached to the “main” letter, like an accent é, tilde ñ or cedilla ç. Greek has four basic types:

Unless otherwise specified, in transcription all diacritics in Greek text are reproduced. In transliteration only the "rough breathing" is recorded.

Watch out! Greek diphthongs (two vowels together) are always treated as a package, so when you have two adjoining vowels (αι, αυ, ει, ευ, οι, ου; ηυ & υι), the diacritic will appear on the second vowel, but the h for a rough breathing mark will go before the first vowel in the transliteration. (If you should meet αυι, ευι, ουι or ηυι then the 1st pair will be the diphthong and the ι will be single.)

A single vowel can carry as many as three diacritics: breathing mark and accent and iota subscript. If a letter has both an accent and a breathing mark, the accent will be either above or to the right of the breathing. One you may really meet is the word

transliterated [Greek: hô]. <Warning: In fonts where the circumflex form of the accent is used, this can be difficult to distinguish from the simple phi φ.> Similarly, dieresis may be combined with an accent; the accent will then be perched on top of the dieresis.

The “breathing mark” is the Greek way of writing the letter h. The two forms are

“rough breathing” (curls to the right, like a C:

)
“smooth breathing“ (curls to the left, like a comma:

Except for ῥ (rho r) you will normally only see a breathing mark at the beginning of a word.

means “This word does not begin with an h sound”, so it is ignored in transliteration.

is transliterated as h before the letter, with these exceptions:

In Greek, as in English, there are plenty of word pairs where the only difference is the initial h sound. For example, these two words:

would be transliterated as [Greek: hodous] and [Greek: odous], respectively.

If a word begins with rho, it always has rough breathing, with the rho transliterated as "rh". Note that the "h" goes after the rho, rather than before as with vowels. English words like “rhyme“ and “rhombus” may help you remember this rule.

Double rho in the middle of a word always has rough breathing on the second rho, so διαρροια should be transliterated as diarrhoia. Do this even if the breathing mark is omitted in the printed text.

This is the same diacritic you see in English words such as “coöperate“ or “reënter”. It means that two letters you would normally treat as a diphthong (in English, more often a “long” vowel) should be read as two separate syllables.

You are not required to transliterate dieresis. But the characters ü and ï are in the Latin-1 character set, and will never conflict with anything else in the transliteration, so you may as well include it.

This is simply the letter ι (iota i) tucked under a long vowel (alpha, eta, omega). In general, iota subscript is ignored in transliteration.

Greek uses the same accents you see in modern European languages such as French: acute á, grave à and circumflex â. In most Greek fonts, the circumflex looks more like a tilde than the usual “hat” form, but it really is a circumflex.

Unless the Project Comments say otherwise, accents are not recorded during transliteration.

In some projects, the Project Comments will explicitly ask for all accents to be preserved. The system most often used at DP is a hybrid of our ordinary transliteration scheme and Beta code; see the Marking Accents page for details.

would be transcribed thus:

In transliteration, as there are rough breathing marks in the first and fourth words, the letter "h" is added to the start of those words, and all other diacritics are ignored. This phrase would be transliterated:

For the Terminally Inquisitive

With rare exceptions, each Greek word contains exactly one accent, and it will be on one of the last three syllables. (There are a few very rare exceptions to this.) The grave and acute accent are really the same thing, so you will never see a grave accent in mid-word.

The form ῥ (rh-) is not an orthographic quirk; it reflects the history of the language. Almost all Greek words in ρ started out as sr- which eventually morphed into hr- and then rh-.

Punctuation marks in Greek should be transcribed or transliterated along with the letters. Two of them are exactly the same as in English: the period and the comma. Note that Greek doesn't automatically put a capital letter at the beginning of a sentence, though names are usually capitalized.

Two other punctuation marks are different from English:

The apostrophes at the ends of some words are, in fact, apostrophes, and serve the same purpose that they do in English: The author is leavin' some letters off the ends o' words. Please include the apostrophes in your transcription or transliteration, keeping the space between words. These are not contractions.

Apostrophes are also used to indicate numerals. If the Greek seems unpronounceable and the "word" ends with an apostrophe, you're probably dealing with numerals (for example, ρκ' = 120, σιη' = 218). Refer to Wikipedia's article on Greek numerals. Please proof them as they appear on the page, not as the corresponding number.

If a bit of Greek ends with a period, does it go inside or outside the markup? Use the same guidelines as for formatting: if the passage is a full sentence, or if it's an abbreviated word, put the period inside the [Greek: ] tags. You may think you can't possibly tell if a Greek word is an abbreviation, but most of them are names of texts, so they will be followed by numbers. If it says something like

it's an abbreviation, and becomes [Greek: Asp.] 574. Another common one is

which is Greek for etc.--period and all.

If you meet a ; at the end of a Greek passage, how can you tell if it's a Greek question mark or an English semicolon? Well, sometimes you can't. But your best guide is the surrounding English (or at least non-Greek) text. If it's a new sentence, the ; was a question mark and in a transliterated version goes inside the [Greek: ] tags. If the text carries on from mid-sentence, the ; was a semicolon and belongs with the English.

Latin is Your Friend

Some Greek words made their way into classical Latin, and many more Greek words were used to make technical, scientific and medical Latin. When you have the Latin, you can often figure out what the Greek ought to be. Details and examples are on the Latin is Your Friend sub-page.

If Greek makes you unhappy, stop right here. DP expects you to handle basic Greek with the help of the available tools and Greek How-To. You don't have to struggle with the whole Greek spectrum, from unusual letterforms to cryptic ligatures to decorative-but-illegible squiggles. A simple [**indecipherable Greek] and a post to the project thread will do. But if you want to delve deeper, read on.

This form of sigma: ς normally only occurs at the end of a word. If you meet one in the middle of a word, it's almost always a letter called "stigma" and the top bit of it usually extends further to the right: ϛ. It gets transliterated as st.

This letter is a shorthand way of writing ου (transliterated ou). Think of it as υ (upsilon) balanced on top of ο (omicron).

Here are some common variant forms. Each one is shown between alphas so you can see where the letter goes in relation to the overall line:

Unless you are familiar with the Ancient Greek language, please do not attempt to process words containing the ligatures discussed here. Instead, post to the appropriate Greek Help thread.

In older books, printed Greek used a lot of ligatures. These are groups of letters joined together or abbreviated, rather than being written separately. Two of the most common ones, the double letters mentioned above, lasted until well into the 19th century, so you will meet them in almost all Greek texts.

Ligatures originated with scribal (hand-written) Greek as a way of abbreviating common letter sequences. Latin did the same thing. But unlike Latin, which got rid of almost all its abbreviations soon after printing was developed, Greek held on to the ligatures until the 18th century.

Some examples (hyphenated to show where in a word you are likely to find them):

These images contain many of the ligatures: 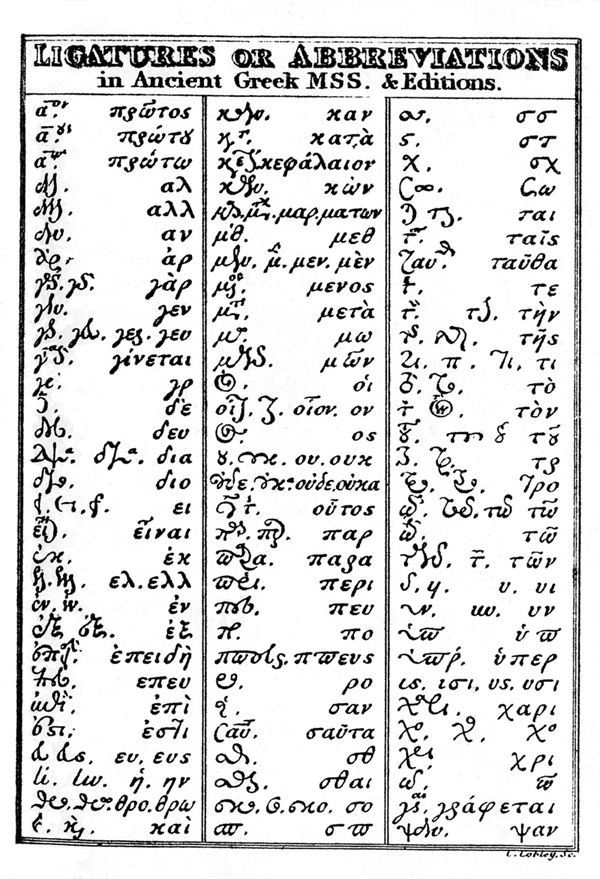 (To see a larger version of this image, please click here) 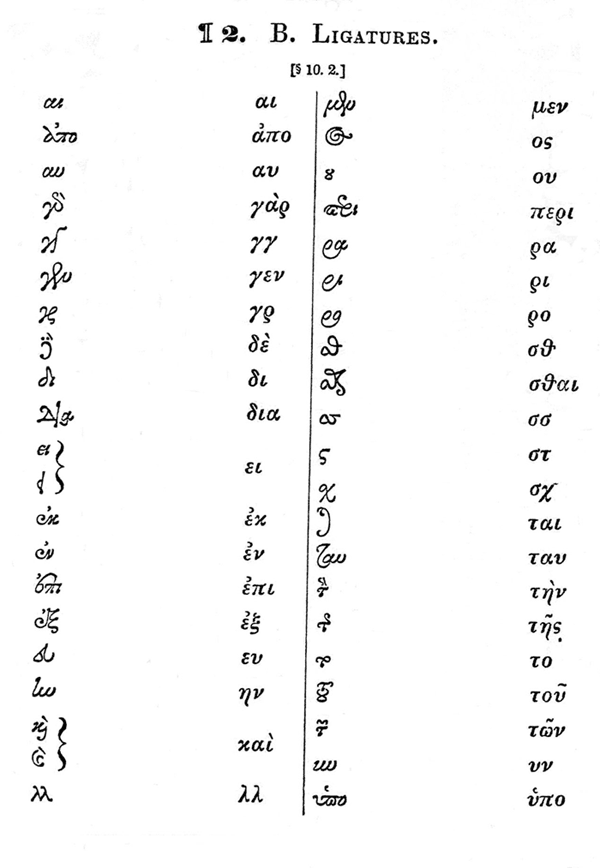 (To see a larger version of this image, please click here)

An even more thorough set is available on these two pages: page 1 and page 2.