For most projects containing text in Ancient Greek, Proofreaders will have checked or directly input the Greek characters. This task is known as transcription: that is, they have ensured that Greek imaged characters in the source image equate to Greek text characters in the text version. The task of the post-processor here may still involve some editing of the Greek text, to correct any remaining errors or omissions.

Before the introduction of Unicode character sets in 2020, Proofreaders were instead asked to transliterate Greek text, for the most part ignoring accents. Some projects coming up for post-processing may have undergone transliteration, in which the Greek is represented by equivalent Roman letters, marked up as in [Greek: Biblos]. The Project Comments may contain further advice. For such projects the post-processor will need to input the Greek characters, including the addition of diacritical marks. Guiguts includes a Greek Transliteration Tool to assist with this.

In either case, the available methods of inputting or editing Greek text include direct input from the keyboard in (polytonic) Greek, or the use of an internet application such as those mentioned below.

Post-processors may wish to mark Greek text in the .html file with the Ancient Greek language tag "grc", for example:

Detailed information on the Greek alphabet is available here.

Typing Greek from a keyboard

It is possible on most systems to input Greek directly using keystrokes on a standard keyboard. Below are instructions to support this process for Windows, Mac and Linux systems. The proofing and formatting interfaces support this method of entering Greek characters. For Guiguts users, from version 1.3 onwards it is possible to enter polytonic Greek text direct. Other programs used by post-processors may not provide for direct entry, and to enter Greek into such a program requires typing into a standard text editor or using a web-based tool, then copying and pasting the result.

Chances are that if you want to type Greek directly on your Windows keyboard for DP, you will be using the Polytonic Greek characters. If you've never enabled additional keyboards before, be aware that with each new version of the operating system, there may be small differences in exactly where to look. These instructions are for Windows 10, but a similar process should work for other versions. 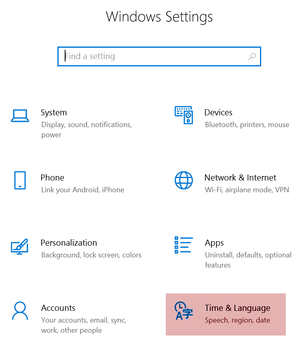 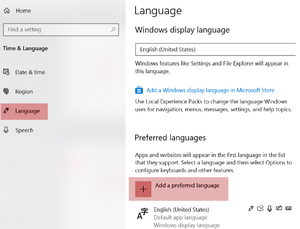 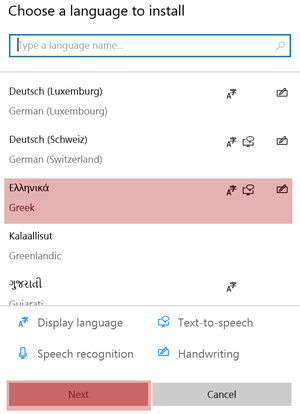 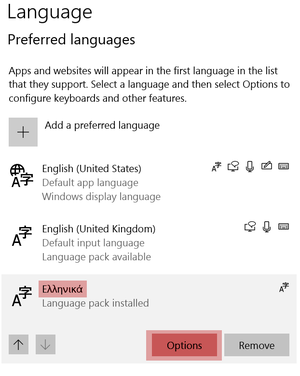 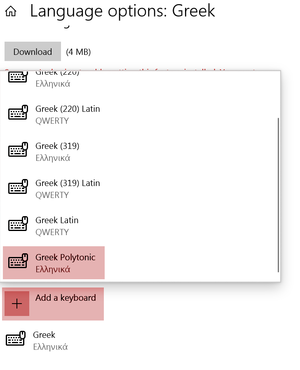 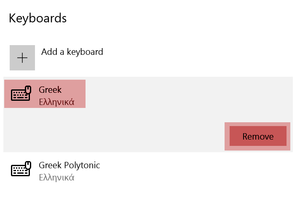 Most Greek letters correspond to their equivalent Latin keys.

Tip: You can use the <Windows key> + <Ctrl> + O to pop up the on-screen keyboard

By referring to the the on-screen keyboard and your own physical keyboard, you should be able to work out which keys correspond to which accents if the ones listed below do not work. The location of the key on the keyboard is what is relevant, rather than what is printed on the key. For example, on a physical UK keyboard, Shift+' gives @ rather than ". So in the list below where " is used for polytonic Greek typing, on a UK keyboard you would actually press the @ symbol. Similarly, press # and ~ for \ and |. Physical keyboards for other languages may have other differences. In the worst case, you may have to use the on-screen keyboard (<Windows key> + <Ctrl> + O) to get the most obscure combinations of accents, breathing and subscripts.

To type characters with accents, you first type the key for the accent, then the key for the letter. For example, the q gives an acute accent, so typing q a will give ά. In contrast with some other dead key systems, there is a single key press (possibly with <Shift> or <Right Alt> modifiers) for all combined accents and breathing - you do not press one key for acute accent followed by another key for smooth breathing followed by your letter. See below for details.

Smooth breathing may be placed on its own or combined with other accents:

Rough breathing uses the same keys as smooth breathing, but with the <Shift> key held down when pressing the accent key:

The iota subscript may be placed on its own or combined with the above accents:

To add an iota subscript to any of the above accents, hold the <Right Alt> (maybe marked as Alt Gr) key when pressing the accent keys described above. For example, for acute accent and iota subscript, ᾴ, press <Right Alt>+q a. Don't forget for rough breathing you will need to press <Shift> as well as <Right Alt>. 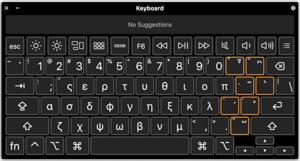 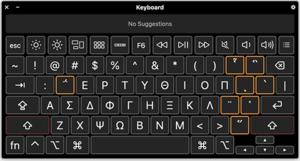 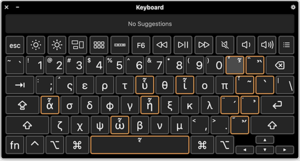 On Ubuntu 20.04 the process to install a Greek keyboard is:

These tools do not require any language or keyboard installation or setup on your computer. They allow you to type using standard letters from your keyboard, but with Greek letters appearing in the text window of the tool. Once you have the Greek passage correct, you can copy and paste it where you need it. Each tool uses a system of additional keystrokes to add the accents and breathing, such as typing 'ha' or 'a(' in order to get the letter ἁ.

As the set of Greek characters exceeds 300 distinct items, it can be difficult for even an experienced Grecian to pick out the appropriate characters from all the rest in an all-in-one table. To assist with this, the internet application "Greek4" is available. This produces both a transcription in Greek characters and a transliteration (in a similar way to the regular Greek Transliterator in the proofreading interface). Characters (with diacritics) are selected (clicked) successively in the Transcription window and, when complete, copied and pasted into the text area.

The Greek4 transliterator is accessed thus:

Greek4 displays a numbers of selection buttons and 2 bars of Greek characters.

The lower bar (2 rows) contains those characters which do have diacritics and changes its display dynamically according to preselector buttons. Please assess the image character carefully to determine what diacritics it may have. There are 4 groups of possibilities which can be combined together.

As the preselector buttons are set, the (lower) selection bar changes contents to match the settings. If the selection display doesn't include a match for the image character, you haven't got the selector settings correct. When you see the required, fully marked character in the (lower) bar, click it.

As characters are clicked they will be built into the collection area at the bottom of the transcription window. When the required Greek text is complete, it should be selected, copied and pasted into the edited text.

There are no editing tools at present apart from "Clear". If you make a mistake: make a space, continue at the appropriate word start and try again. You will need to edit out the erroneous parts later in the text area.

(The space character is the blank box in the upper bar: you won't see anything there, but if you click it, it will work.)

Other punctuation and special characters are also available in the upper bar. Note that this does not include alternate glyph forms of standard letters such as phi and kappa for which the standard form should be used. If you think that there is a need, please (if proofing) post in the project discussion or (if post-processing) consider a Transcriber's Note, but normally these are only a font distinction, not deliberately different characters.

There is a button for ALL CAPS mode but this is primarily for use when transliterating.

Other web-based tools for Greek include: