From DPWiki
< Periodicals Guide
Jump to navigation Jump to search

Using the above guidelines, a completed section of receipts should look like this at the conclusion of the P* Rounds.

Example of scanned image: (Note: figures do not add up as this was cobbled together from various pages to show different types of lines.) 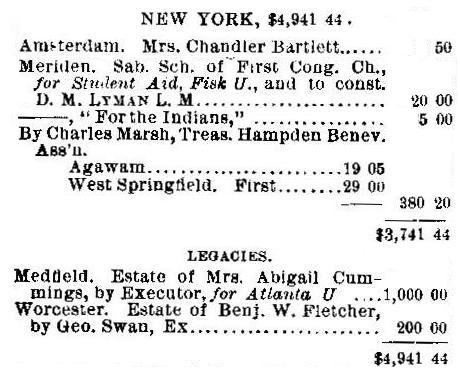 Proofed text for above image:

Misc. Comments from Proofers Regarding this Periodical

This project uses TEI markup for the Receipts table. Prior to August 2016, instructions were to use TEI for all tables with dollar values. Currently, standard table markup should be used for tables other than the Receipts. If TEI markup has been used for other tables formatted prior to this change, it is not necessary to change it.

The Missionary Field (2 blank lines before)

The State (2 blank lines before)

The City (2 blank lines before)

(where appropriate) school or institute (2 blank lines before)

Under each job title or department are names with their respective cities. Enclose each list in nowrap markup, even when there is only one entry. Make the lists a single column. Separate the name and the city by at least 6 blank spaces. When the name and the job title are on the same line, keep the name and job title together in the first column, and the state and city together in the second column, with 6 spaces between the columns. An example of this can be found in at the very bottom of the complete example below.

Example of scanned image: (Note: figures do not add up as this was cobbled together from various pages to show different types of lines.)

Proofed text from example in proofing section above (except that an extra line has been added after West Springfield to improve the formatting example):

Formatted text for example above:

For standard projects finishing the rounds, separate each advertisement, regardless of size, with a thought break, surrounded as usual by blank lines. For the missing pages projects, please use the standard guidelines of 4 lines before full- and half-page ads, and two lines before smaller ads.

Use utf8 characters to provide curly quotes, use the mdash for dashes in both the text and html versions. Use the left- and right-pointing hand characters in the text version, but small inline illustrations in the html version.

Page numbers run consecutively from issue to issue for the entire year. The first two images (generally the table of contents and the list of officers) are not paginated. Neither are the last two images, which represent the inside and outside of the back cover.

Begin the construction of the html version with the following CSS, which is used in the examples in these guidelines:

Eliminate any unused CSS at the end of formatting. If new CSS is required for more than a single issue, or a better formatting solution is found, please PM Arlene so we can add it to the standard template.

There is an outside and an inside cover for most issues. The outside cover typically contains a header with a stylized "American Missionary" heading, followed by the table of contents, and the publishing information. The table of contents consists of several major sections with articles, following by sections without articles. The inside cover typically lists the officers for the American Missionary Association, but is sometimes replaced by an illustration.

Center text from all the decorative headings, followed by the table of contents. Center the CONTENTS header. Major sections (EDITORIAL, THE FREEDMEN, etc.) should be preceded by two blank lines and followed by one blank line. Major sections in the table of contents should be indented two spaces from the left, with articles below them indented two more spaces and single-spaced. Page numbers should be moved to the right margin and right-aligned.

Using the cover image, remove all the extra space between the sections to reduce the height so that the cover can be produced at 600x800px. Use this colored cover for the mobile versions. Duplicate this information in textual format at the beginning of the html file, matching spacing and approximate relative font sizes.

Duplicate as much as possible the layout of the page, using two and three columns as in the original. The "position" class is for formatting the position headings. Using tables with the "tdpr" class results in good formatting for smaller screens in browsers, and also in the epub version. For example:

The first actual page of each issue begins with a banner documenting the date and issue. The text version should be surrounded with thought break lines, and centered:

The first actual page of each issue begins with a banner documenting the date and issue. The following markup (using the CSS above) will result in an issue banner that is compatible with epub and Kindle formats, and will look like the text banner in the previous section.

Major sections are those listed in the table of contents as major headings, typically including EDITORIALS, AFRICA, COMMUNICATIONS, THE CHILDREN'S PAGE, and RECEIPTS, among others. The Contents and Transcriber's notes are also major sections. See the section on Advertisements for the handling of breaks between them.

Enclose the title for each major section in <h2> tags. Enclose each article title in <h3> tags, even when articles are combined on the same lines in the table of contents. Article divisions should use <h4>, then <h5>, and even <h6> tags if necessary to duplicate the structure of the article. The use of these tags, rather than markup which duplicates the formatting, allows ePub to create the appropriate navigable document outline.

Enclose each article, including its title, in <div class="article"></div> tags. This helps to prevent unexpected and unwanted page breaks in the ePub version.

Each state heading is preceded by two blank lines and indented two spaces. The first line of each entry is indented four spaces. If the entry continues onto multiple lines, subsequent lines are indented 6 spaces, creating a "hanging" effect. The text column of the entries must be separated from the amounts column by at least 6 spaces. The amounts are right-aligned, ending in column 67. Unicode mdash characters are used to create underlines. Total labels indented in the original text are indented 8 spaces.

Enclose each state in its own <table class="receipts"></table> tags. Enclose each state heading in <td class="statehead" colspan="2"></td> tags. The left text column has a class of "sub1" and the right amount column has a class of "ramt". Totals and other indented entries can use the class "sub2". There are sometimes extra non-state tables at the end of the state receipts which can be treated in the same manner. A short example:

Separate the advertisements with thought breaks surrounded by two blank lines above and two blank lines below. Avoid using thought breaks inside the advertisements, using an extra blank line to separate sections if needed. Duplicate the general look of the ad, centering and right-shifting text as necessary. Very heavily marked up text may need to have the markups removed to be readable. If this is necessary, add an entry to the Transcriber's Notes to indicate this change.

Surround each advertisement with some extra white space and a full-width horizontal rule. Using the CSS from the standard template above:

and separate them with

Format the ads similarly to the original, centering and shifting text, using different font sizes, and bold as needed. Use small illustrations for left- and right-pointing hands. Include all images, but generally provide the text as actual text. A few of the ads (e.g. Marvin's Safes) are better represented completely as images, as the presentation of the text is artwork designed to express the character of the company or the product. Use this technique only when the image contributes an important part of the marketing message, as it is desirable that the text and html versions be as identical as possible.

Transcriber's notes are a major section, and treated as such. The notes should begin with a comment similar to : "Punctuation, spelling and grammar were changed only where the error appears to be a printing error. The punctuation changes are too numerous to list; the others are as follows:". This is followed by each correction made, listing the original text, corrected text, original page, and enough context to search for the correction. In the html version, the context should be linked back to the location in the text, for example: