Number of Proofers vs. wa/w

As requested in the CiP forum, here is number of proofers who worked a round vs wa/w: 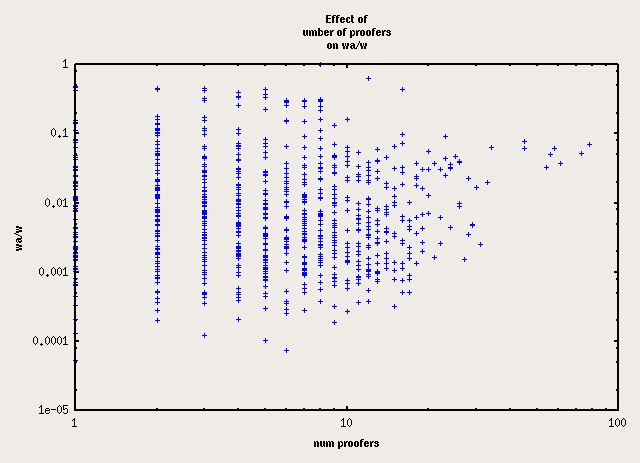 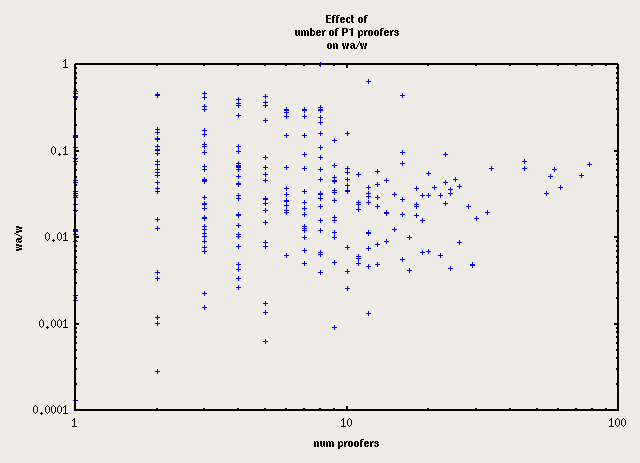 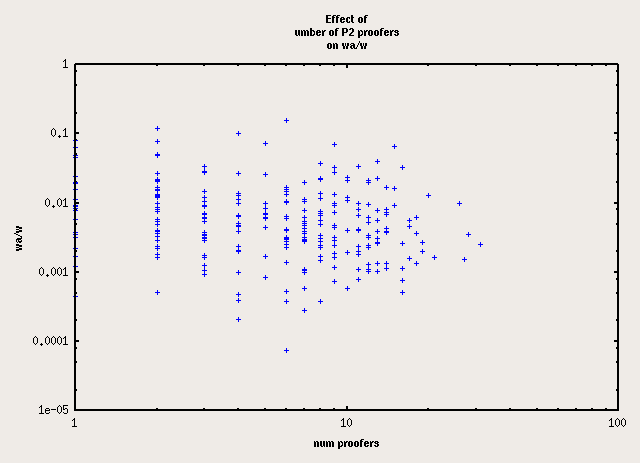 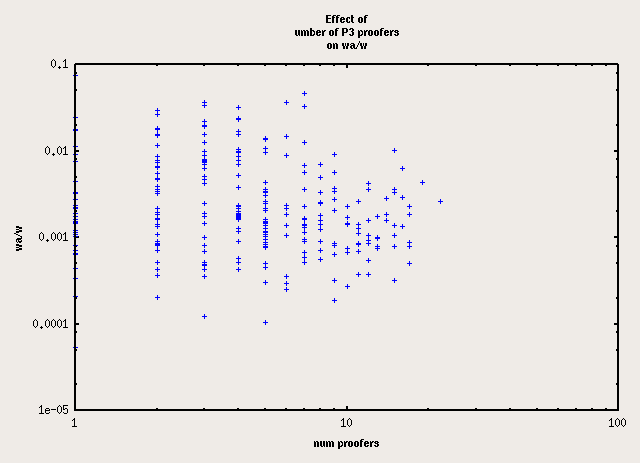 fvandrog: Here are the results of the QC projects:

The grand average is 1 error per 12.41 pages; 1 error per 18.54k characters, or 99.994695 percent correct. The general conclusions are that the more passes a project has gone through, the less errors remain; and the higher the round the better the efficiency. Another result confirming existing suspicions is that the retread project (QC3) has a lot of remaining errors -- most of them around pre-existing markup (the project is also an outlier, where more rounds didn't result in a higher quality).

The large majority of errors in the French project (QC8) concerned accented letters, and differences with current spelling rules.

I looked at each single diff in all of the projects to decided whether or not it counted as a significant error, and counted multiple errors per page where appropriate.

rfrank: I wrote my own "real difference" script from scratch in Perl. The hard part was comparing P3 to F1 and ignoring formatting as best as I could. For the curious, it uses both Algorithm::Diff qw(diff) and Text::LevenshteinXS qw(distance).

The realdiff.pl script is available to anyone, but only pieces of it will be useful. I do not have server access to data, which would be much better as it would allow me to access more than the type of books in my queues, and in all five rounds. Currently, I only have my own data (as a PM), and it's a limited set of only 3462 pages and only with text from OCR, P1, P2, P3, and F1.

Still, the results of looking at those pages is interesting. I believe that "This means something."

Here's what struck me. Over half of the pages were done with proofing after P1. As a rough approximation, if those pages go through P2 and P3, that's about 3900 pages looked at in those later rounds unnecessarily. Seems to me that's a best-case target if we can determine very quickly that a page is done. A crude extrapolation from this seems to indicate that this CiP project, done right and implemented in a roundless system, can process about three times the pages we do now with the same number of people.

piggy: If I understand your data correctly, your interpretation might be a little too optimistic. Were the lines "P2 found P1 miss" and down only pages which had changes made in P1 or did they include ALL pages?

Each round of a page having zero changes merely increases our confidence that it is defect-free (by a factor of about 2).

A crude interpretation of your data is that the number of rounds needed to get a page down to a 50/50 chance of having a remaining defect is 1 + log_2 of the number of changes made during P1. That's pretty cool.

Calculating "roughly half" is a bit tricky. We need to know the distribution of numbers of changes in a page from round to round. Then we set the range of "roughly" to be 2 sigmas out from the midpoint (assuming the distribution is actually Gaussian). I can't do this off the top of my head--I need to dig out one of my reference books for an example to compare against.

We should be able to say something about the total fraction of all errors found but I'm drawing a blank right now on that calculation (I keep getting different answers).

Hmm... I don't know if it means anything, but the ratio of changed pages is going up steadily round by round. The epsilon process isn't quite stable:

This COULD be the "expertise effect" we're all expecting. People who have qualified for later rounds are better at finding defects. I would like to corroborate this by looking at individual proofer data.

I also have a suspicion that there is a "noise floor". If you make someone look at enough defect-free pages, they will eventually hallucinate the need for a change. I'm not exactly sure how to measure this possible effect. If it's a real effect, it puts a hard upper bound on the quality possible by straight serial proofing.

veverica: concerning the data of eleven projects one could draw a conclusion that every round find approximately 50% of errors from the previous rounds. But we are still not sure how many errors still remains after F1.

wainwra: The thing that struck me most about the "eleven projects" data was how similarly the error detection rates were between the rounds. I would have expected a much higher detection rate between P2 and P3, for example. I'm also very suspicious about the P3-F1 boundary, because there are quite a few valid changes that F1 can make to a text which aren't covered by formatting tags.

garweyne: The data from P1.5 were different, and they were analyzed per person and per type of difference: there were large differences for persons, and of course projects with less than perfect OCR have a much higher number of corrections in OCR->P1, especially with levenshtein distance (removing a header counts as much as 60 comma-period swaps, arid/and counts twice as much as he/be).

jhellingman: I suggest treating the first round different from further rounds. P1 primarily is cleaning up the mess OCR has left behind. For books that have some trouble with OCR, this means considerable work, which pulls attention away from things that just look right. We could create a weighted diff to take into account difficulty of detecting some issues, and mostly ignore unimportant differences. (Series of spaces to one space count very low or zero; c -> e and h -> b type errors count double.)

rfrank: I have been examining those factors that may predict the confidence we may have that a page is "done." My hypothesis was that the number of pages done by a proofer is a partial predictor of page quality, and that distribution will be bimodal. The prediction is that those with a very low page count will have more errors because of inexperience, and those with very high page counts may have more errors because of the rate at which they proof. The most reliable proofers will be somewhere in the middle on page count.

Of course, some low-volume proofers are very good. I've had participants in the Newcomers Only project that get 10 or even 20 pages correct, with no diffs on any of their pages. Some high volume proofers are very reliable also. I do not have access to the time spent proofing a page, which I feel would be a complementary predictor for the high page count proofers.

That said, is there a pattern? Is there news we can use? I've made a spreadsheet of the analysis and the code that generated the raw data available on the project's git repository. I've used the small dataset of 23,552 pages. Here is my conclusion.

I know I could make the analysis data more accurate, but I don't think it would change the result, which in non-stat terms is "there seems to be a relationship between the page counts of a proofer and the quality of the proofing, but it's not strong enough to be usable on its own."

These metrics are not using realdiff or wdiff but a simple "are the pages different" metric due to some challenges with realdiff on the dataset and the expectation that in the big picture for this specific analysis it is not a major factor.

Here is a graphical version of column 1 (log_10) versus column 7. The label identifying the metric on the graph is wrong. 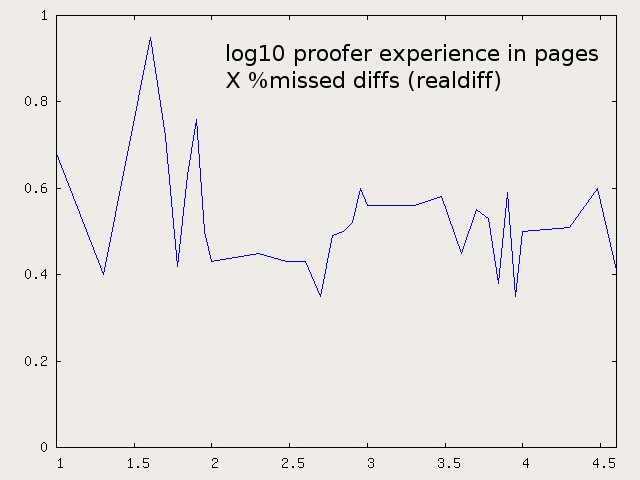 Let's look at a similar analysis to the above. This scatter plot is from the same dataset as the above. Some of the notable differences:

The distribution of pages completed by proofers is roughly exponential

, so, as Roger observed, it makes sense to present that data along a logorithmic axis.

The horizontal lines should be familiar to those who read the Not a Result entry. Most pages experience at most a small integer number of changes in all rounds. When you convert small integers to percentages, you get a limited number of values.

In order to better visualize those horizontal lines, we add a little Gaussian blur to get the right-hand image. This really emphasizes the fact that the most common values for this metric are 1.0 (all remaining changes made in this round) and 0.0 (no changes made in this round, but changes in subsequent rounds). This binary behavior might not be very desirable in our final page quality metric.

Another problem with this metric is prominent in the last column. We have a single proofer who did over 5000 pages of our 90,000 page dataset, about 18% of all pages--certainly an impressive feat! This person worked almost exclusively in P3, which the algorithm under discussion gives 1.0 to automatically. Clearly we need some other method for estimating the relative accuracy of pages proofed under these conditions.

Detailed data for the first Perpetual P1 experiment can be found at Confidence in Page Algorithm#Perpetual P1.

Bowerbird@aol.com has thoughtfully done a detailed analysis of the first three iterations of the Perpetual P1 Experiment. The original analysis (subscription needed) was posted to the gutvol-d mailing list. He granted me permission to summarize his results here. This is primarily the numerical content. Please refer to the original for interpretation and trenchant analysis.

I added the applications of Polya's formula. --piggy

This is a breakdown of error classes found in I1-I3.

This is the performance of the original project on the "real" errors.

In summary, the text coming from 3 rounds of p1 was not significantly different from the text that was produced by the normal p1-p2-p3 workflow. Both versions of the text had approximately 5-10 errors remaining. For a 150-page book like this one, that is quite an acceptable rate of errors.

[I think the figure of 5-10 remaining errors is based on initial observations of I4. Bowerbird goes on to mention two more errors that he spotted while analyzing the book. --piggy]

[Given that leaving eol-hyphens in the text breaks the searchability of the text, I think that disqualifying eol-hyphens from the category of 'real' errors is unjustified. It would be interesting to see the comparison of p1-p1-p1 with p1-p2-p3 if these important errors were included in the analysis. (My guess is that there would indeed be a significant difference in the text if eol-hyphens were not arbitrarily ignored) -- big_bill

I believe he omits them because they are mostly removable by automation. I would add that hyphenation is the cause of a second noise floor in the first Perpetual P1 experiment. The ideal metric for deciding P1->P1 would exclude everything that P1 is not good at fixing. For purposes of comparing P1 and P3, I agree that omitting hyphens is not a good idea. -- piggy]

It appears a few of the "corrections" of the original paper book "errors" might have been just a touch over-zealous. If you're curious, the "errors" on page 86 look intentional in retrospect. [I don't see this. If somebody else figures out this reference, please elaborate here. Is this a reference to the apparent practical joke on page 45 of I4? --piggy]