Use Tools>Basic Fixup... to display the Fixup options: 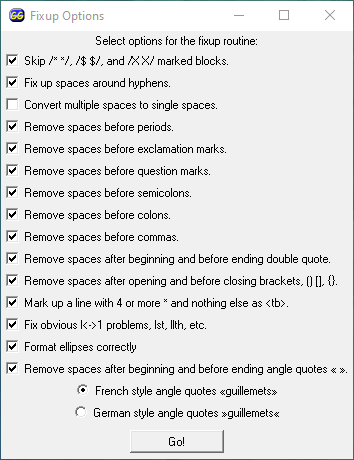 The actions in this list correct common minor errors in proofread documents. Most of the actions are self-explanatory and uncontroversial. You might consider disabling the first action, thus permitting Fixup to modify the contents of block markups. If you do, consider also disabling "Convert multiple spaces to single spaces" which can spoil the formatting of manually-formatted tables.

Fix up spaces around hyphens sometimes fixes spaces that you may wish to keep.

Click Go to apply the enabled actions throughout the document.

Use Tools>Remove End-of-line Spaces to search for and delete spaces at the ends of lines throughout the document. This small, invisible error is common in proofread pages; also you can easily introduce end-of-line spaces as you edit the book. Apply this action as often as you like, and always as part of finalizing the ASCII version of the book.

In some books, poems are printed with reference line numbers alongside. Typically there is a number every 5 or every 10 lines, so the author can refer to line 193 and the reader can quickly locate it.

Proofers will space these line numbers away from the poetry by some distance, but will not be consistent. You can use Fixup> Reformat Poetry Line Numbers to right-align all poem line numbers to a consistent right margin.

When you select this menu item, Guiguts scans the entire document searching for all numbers that stand at the right end of their lines, and are separated by at least two spaces from the text to their left (the regex would be \s\s+(\d+)$). It adds or removes spaces before each such number so that the rightmost digit falls on the current rewrap right margin.

You can control the right margin for the numbers by using Prefs> Set Rewrap margins to set the Rewrap Right Margin. You can undo the changes by repeatedly applying Undo.

Guiguts does not recognize rewrap markers during this scan, and it does not confine its search to text enclosed in /P..P/ or /*..*/ as you might suppose it would. As a result,

A sidenote is a scrap of text set in the margin of the page to indicate the topic of the adjacent text. Some old nonfiction books use sidenotes extensively. They are sometimes seen in modern academic journals. The content of a sidenote is brief, often not a complete sentence.

You would like to put sidenotes above the paragraphs they describe if possible, but where the notes were embedded in a long paragraph, that may not be practical. Decide with the project manager whether it is valid to split a long paragraph at a sidenote, to keep the note near its topic.

The Fixup> Sidenote Fixup menu item performs global changes throughout the document. It converts "sidenote" to "Sidenote"; and it moves any sidenote that is not already surrounded by blank lines up to precede the paragraph it touches with blank lines above and below it. (This works in older versions of Guiguts. Specifically, version .55)